Meth-Wick was established in 1961 through a combination of thoughtful planning and charitable gifts. Local attorney and philanthropist Barthinius L. Wick wanted to create a place where older adults could live together in community during their retirement years. He wasnâ€™t able to accomplish his goal before his death in 1947 so he put aside $308,000 in his trust and left his trustees with a mission to make his dream a reality.

The trustees knew that Mr. Wickâ€™s trust funds were not large enough to open and sustain a retirement home so they invested the estate proceeds, growing the fund to $715,000 by 1961. That year, the Upper Iowa Conference of the Methodist Church (UICMC) asked the B.L. Wick Foundation if theyâ€™d be willing to partner on the venture. The church had experience running senior homes around the state. The foundation agreed to the proposal and the team began planning. 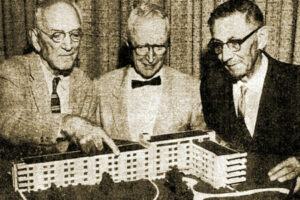 The B.L. Wick Foundation purchased a 26-acre plot in northwest Cedar Rapids on a hill overlooking Harrison Elementary School. They broke ground on the 158-room Meth-Wick Manor in May 1961. Local firm O.F. Paulson constructed the six-story building. The planning committee projected it would cost $2.4 million, making it the most expensive construction project in Cedar Rapids that year. 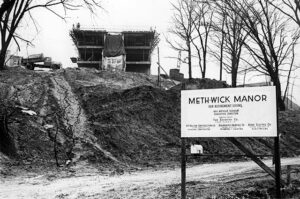 That fall, teams carried in furniture from Smulekoffâ€™s to furnish the common areas and Killianâ€™s installed the drapes and carpeting. Meth-Wick had 70 charter residents signed up and ready to move in when the building opened in November 1961. Residents paid $120 per month for housing, meals, laundry, housekeeping, and medical care. The Manor also included a 30-bed infirmary administered by St. Lukeâ€™s Hospital. Even from the beginning, Meth-Wick committed to providing a spectrum of care for residents so they could live safely and comfortably in their new homes for many years to come.

Over the next half century, Meth-Wick continued to grow. Our campus now consists of five different styles of living in eight different residences spread across 68-acres, from nursing care in private rooms to independent living in single-family homes. Walking trails crisscross the rolling hills of campus, guiding walkers and bikers past a sparkling koi pond and along a rippling creek.