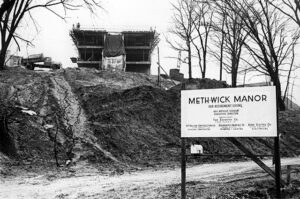 This month, we celebrate our 60th anniversary and kick off a year of celebration and commemoration.

But first, let‚Äôs take a look back on how Meth-Wick Community has grown since our very first resident moved in The Manor in 1961.

Meth-Wick Manor opens its doors. The first residents lived in private suites, took their meals in the dining room, and enjoyed a snack from the popcorn cart on Friday afternoons. ¬ÝSt. Luke‚Äôs Hospital administered a 30-bed infirmary on the first floor. Meth-Wick‚Äôs commitment to providing residents with a continuum of care dates back to our earliest days.

The Manor is updated in its second decade to suit residents‚Äô needs, converting spaces into multi-room apartments, and adding air conditioning.

The Community Center is built at Greenwood Terrace to provide a main entrance and central meeting place for residents. The center also connects the existing tower with its twin under construction.

Meth-Wick reaches the $1 million fundraising goal to renovate the Health Center at The Manor. Renovations include an increase in private rooms from five to 27, a new activity area, updated staff quarters, and modernizing the floor‚Äôs d√©cor.

Greenwood Terrace doubles in size with the addition of a second tower, bringing the building to its current total of 55 apartments.

Brendelwood Village expands Meth-Wick‚Äôs independent living options with a neighborhood of duplexes and single-family homes nestled into the wooded hills above Greenwood Terrace.

A chapel and chaplains office are added to The Manor‚Äôs ground floor. Meth-Wick is a community focused on six dimensions of wellness: spiritual, physical, vocational, emotional, intellectual, and social.

Deer Ridge opens in response to the growing number of older adults looking to live independently but with an eye toward their future. The new building is home to 63 condominiums.

Following a three-year capital campaign, Arbor Place opens as Meth-Wick‚Äôs residence for those with mild to moderate cognitive loss due to Alzheimer‚Äôs disease and other forms of dementia.

The Woodlands opens, bringing a fifth style of living to Meth-Wick‚Äôs campus. The Woodlands is a state-of-the-art nursing facility that provides for residents in need of round-the-clock care or unique specialty care.

Construction is completed on Town Center at The Manor. Town Center was created to be the new community hub for campus, featuring a fitness center, coffee shop, library, computer lab, beauty and barber shop, and comfortable spaces to gather with friends.

The Woodlands expansion is completed, adding a 5,000 square foot extension including two warm water pools for physical therapy and recreation and a state-of-the-art interior lighting system that mimics outdoor light.

Oakwood opens as Meth-Wick‚Äôs latest independent living addition, featuring 21 new condominiums in a three-story building on the southeast side of campus.

Here‚Äôs to the next 60 years!