October is Leave A Legacy Month at Meth-Wick Community. While we dedicate every October at Meth-Wick to education and fundraising, this year is special. Meth-Wick opened itsŌĆÖ doors 60 years ago in 1961. In the decades since, our campus and community has flourished thanks to a long and growing list of generous donors. There are as many ways to leave a legacy at Meth-Wick as there are members of our community. LetŌĆÖs hear some of their stories as shared by our Director of Operations, Teresa Dusil.

A Tale of Two Wives 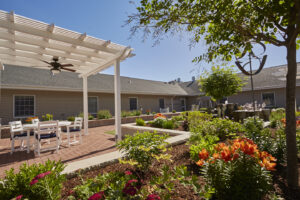 Two women contacted Teresa with a similar request. They each wanted to do something special for their husbands, both of whom lived at The Woodlands. Teresa pulled out The Woodlands wish list for the first woman, with items ranging from $250 radiator covers to a $100,000 courtyard for the Nesetril wing of the building. ŌĆ£I didnŌĆÖt think for a minute that anybody would give us that courtyard, it was more of a dream,ŌĆØ said Teresa. ŌĆ£But she did it!ŌĆØ The woman made a donation to cover the cost of construction, creating a safe and peaceful outdoor space for her husband and his fellow residents to enjoy. Meanwhile, the second woman reached out to put together a memorial gift. Her husband had recently passed away and she wanted to do something to honor him at The Woodlands, the place where he was so well cared for in his final years. Teresa suggested she donate a wind sculpture in her husbandŌĆÖs name to serve as a focal point in the new courtyard. It was exactly the kind of memorial she wanted. Two different couples, two different gifts, both a perfect fit.

A resident approached Teresa to put together a gift for Meth-Wick in honor of his wifeŌĆÖs upcoming birthday. He had a figure in mind, but he and Teresa couldnŌĆÖt find one project to fit his vision. They found three. First, he gave to the Meth-Wick Endowment Fund. The endowment fundŌĆÖs yearly income serves one primary purpose: to help provide ongoing care for residents who have exhausted their financial resources through no fault of their own. Second, he donated to the campaign to build a new therapy pool in The Woodlands and, finally, he bought the campus a new golf cart. Now, these arenŌĆÖt just any old golf carts. The carts at Meth-Wick are specially outfitted to comfortably move residents across campus year-round (even during our Iowa winters). But this golf cart had one more special touch for his wifeŌĆöa specialty license plate proclaiming the cart as ŌĆ£GALLIŌĆÖS GIFT.ŌĆØ

Not all gifts are for specific projects. ŌĆ£ThereŌĆÖs one woman who would call me up toward the end of a fundraising drive, any fundraising drive, and just ask, ŌĆśWhat do you still need?ŌĆÖŌĆØ, said Teresa. Then she would close out the fund by donating whatever Meth-Wick still needed to reach their goal. ŌĆ£I think this individual was surprised to end up with the means she had,ŌĆØ mused Teresa. ŌĆ£We never asked her for anything. She would just come forward when there was a need to be filled.ŌĆØ Sometimes she provided the lead gift, giving her the opportunity to name a wing or a room. Other times, she gave anonymously. ŌĆ£She just liked to be helpful,ŌĆØ said Teresa.

Meth-Wick is a beautiful place purely because of the many generous donations it has received over the last 60 years. The staff can focus on necessities like building roads, replacing carpet, and fixing pipes, while donors give the campus a soul. The picturesque pond, the walking trails that wind through the grounds, the beautiful artwork and sculptures, and the endowment that takes care of every resident in needŌĆöall these projects are made possible by donors. But what could the community change in the next 60 years? ŌĆ£When we go to conferences and hear about the new technologies and products in development for seniors, it makes me think of the Jetsons,ŌĆØ said Teresa. ŌĆ£IŌĆÖm sure golf carts will be a thing of the past. Residents will probably be flying across campus by then!ŌĆØ

Learn more about the philanthropic options available to you or contact Teresa Dusil at (319) 297-8603 or tjkdusil@methwick.org.