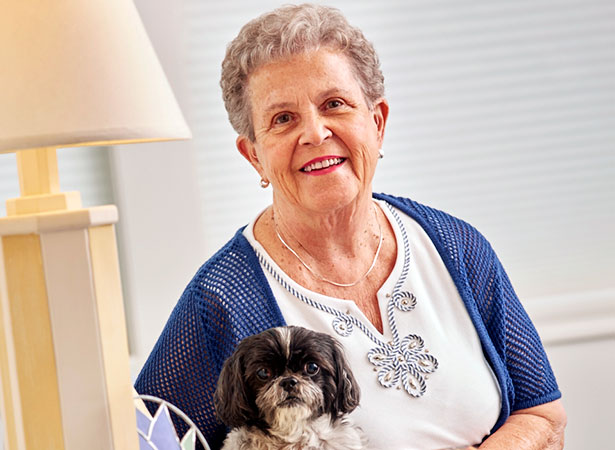 Gretchen Beckhelm has always had an independent, adventurous spirit. After graduating from Mt. Vernon High School, she left Iowa to attend college and never looked back. Gretchen earned degrees in biology and chemistry from Hood College in Maryland. After a year working in a Philadelphia hospital, she then took a job with pharmaceutical company Eli Lilly in Indianapolis where she spent a fulfilling 32-year career in their cardiovascular research division.

During her working years, Gretchen spent time volunteering at a local hospital and at a support center for abused or neglected children. She also traveled extensively throughout Europe, Scandinavia, the Caribbean, Alaska and the Mexican Gold Coast.

After taking an early retirement from Eli Lilly, Gretchen moved to Florida. She built an active life in Punta Gorda and Venice where she spent her days tutoring at an elementary school, playing tennis, and sailing in the Gulf of Mexico.

Gretchen enjoyed twenty-one sun-soaked years in Florida before she realized home was calling. Although they hadnâ€™t lived under the same roof since high school, Gretchen and her sister, Babs, remained close. Gretchen wanted to live closer to family as she began the next stage of her life. So, in January 2017 when she was visiting Mt. Vernon for the Christmas holiday, the Beckhelm sisters got to work.

Ever the planner, Gretchen wanted to find a community that would be able to take care of her future needs. Meth-Wick had a good reputation amongst Babsâ€™ friends in Mt. Vernon so Gretchen headed over to Cedar Rapids to take a look.

Meth-Wick has a full range of health services, an important feature for a woman who never wants to become a burden on her niece and nephews. Although in good health, Gretchen liked the fact that she had options available right on campus should that ever change. Meth-Wick quickly became the obvious choice. Gretchen was so impressed by the community that she never toured another facility.

But she still had an important decision to make. Where would she live on campus?

Gretchen looked around at several styles of living and noticed the skeleton of a building going up on the east side of campus. At this point, it was just concrete stairwells and an elevator shaft. Sales manager Julie Farmer showed her the floor plans for the building, Oakwood, which would be the newest addition to campus. Based on the floor plan alone, Gretchen was hooked. Sheâ€™d found her next home.

Since the building was still under construction, Gretchen was able to pick out her own interior details, like the paint colors and carpeting, to customize the space to her liking. Once the building was completed last fall, Gretchen and her 11-year old Shih Tzu, Barney, moved in and set to work turning their new condo into a home.

After so much time away from her home state, Gretchen had forgotten how friendly Iowans are. Itâ€™s made the move much easier and sheâ€™s enjoyed getting to know her neighbors. She wasnâ€™t looking forward to her first Iowa winter since her teenage years, but even on a gray day, her condoâ€™s sunroom is always warm and bright.

After almost a year in her new place, Gretchen has gotten pleasantly accustomed to life at Meth-Wick. She spends her days reading, knitting caps for premature babies in St. Lukeâ€™s NICU, watching Indianapolis Colts games, and playing bridge with her neighbors. Most of all, she enjoys being able to pick up the phone and make lunch or dinner plans with her family.

Having lived all over the country, in all types of communities, Gretchen knew what she wanted during her next stage of life. She found it at Meth-Wick.