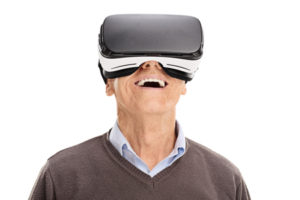 Virtual reality, or VR, is a three-dimensional realistic environment. It is controlled and experienced through the body movements of the user, who wears special headgear. While the technology seems out of this world, its applications for older adults are very down to earth.

A new world of possibilities

According to an article on nextavenue.org,┬ĀVR is being used to ease anxiety and improve brain function of those with dementia and control pain in hospital patients. One person who adamantly believes VR can change lives is Dennis Lally, cofounder of Rendever, a company that specializes in creating VR for older adults. It offers subscription-based VR services to individuals and senior care facilities whose residents are unable to explore the outside world due to mental or physical limitations. With VR, Rendever brings the world to them.

ŌĆ£WeŌĆÖre aggregating tons of wonderful content, like beach scenes,ŌĆØ Lally told NextAvenue. ŌĆ£They can go to a Maui beach and watch the waves come in for 30 minutes or swim with a whale in the ocean. They could sit in the front row of a concert that they wouldnŌĆÖt otherwise be able to attend. We also provide educational stuff, like historical tours or architectural exhibits.ŌĆØ

Rendever can also custom create a VR experience using photos of an event and creating a VR experience that can be enjoyed by family members who were not able to attend. Using the technology close to home, Lally plans to create a VR version of his wedding in Greece so his grandmother can experience the special event as though she had attended it in person.

The mission of Lally and his cofounder, Reed Hayes, is to use VR to reduce or eliminate the isolation and depression that is experienced by many older adults.

During RendeverŌĆÖs initial launch last year, it partnered with a handful of elder care facilities, offering their residents a menu of VR experiences. Family members or staff used a tablet to help residents use the technology.

An article on BostonInno.co┬Āreported that Rendever launched simulation testing last year to help doctors diagnose medical conditions in elderly patients by having them perform tasks in a virtual world. The company is also developing a VR program for therapeutic use with patients suffering from anxiety.

VR as a pain relief alternative

Rendever is not alone in using VR to improve quality of life. The University of Wisconsin uses a VR game, SnowWorld, to reduce pain in burn patients of all ages. The game distracts patients from their pain by taking them through an ice canyon, where they throw snow balls at one another.

A study reported on the National Institute of Health website┬Āsought to test the theory that VR could reduce chronic pain in 30 patients between the ages of 35 and 79. Participants were asked to rate their pain prior to, during, and after a five-minute VR session. The findings were significant. Pain was reduced 33 percent from pre-VR to post-VR session and a whopping 60 percent from pre-VR to during VR session.

We live in a high-tech world that runs the risk of distancing people from one another. It is heartening to know that virtual reality is uniting families, easing pain, and helping older adults live their best life.