After 60 years of helping couples and individuals transition to senior living, Meth-Wick Community has noticed a trend. If there‚Äôs any hesitation from one half of a couple, it‚Äôs often the husband. But they also tend to be the happiest once they are settled into their new home at Meth-Wick. Today we meet two residents who break the reticent husband mold‚ÄîLew Finch and Ron Johnson.

Lew Finch hails from Bondurant, Iowa, where he met his wife, Ardy, in high school. They married 65 years ago, between Lew‚Äôs freshman and sophomore year at Iowa State Teachers College (now the University of Northern Iowa). Over the next twenty years, the Finches had three kids and moved frequently across the West and Midwest as Lew pursued a career as a school administrator, working his way from assistant principal to principal to superintendent. At one point, the family moved seven times in seven years. He was eventually hired as superintendent of the Cedar Rapids Community School District in 1994 and stayed until his retirement, when he began mentoring graduate students from his alma mater preparing to be principals.

The Finches’ Journey to Meth-Wick

Lew and Ardy lived in a spacious condo overlooking the Cedar River for 21 years. ‚ÄúBut the older we got the more we realized, we‚Äôve got to make a move,‚Äù said Ardy.

A neighbor friend moved to Meth-Wick Community, but the Finches had never heard of the place. They came over to their friend‚Äôs new apartment in Greenwood Terrace for tea one day and decided this would be the right move for them. ‚ÄúWe met with a staff member who told us that when you move to Meth-Wick, you‚Äôre here for life. That certainly is a reassuring prospect,‚Äù said Lew. 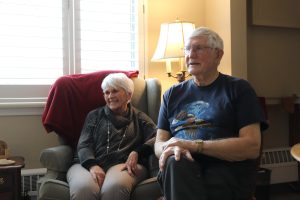 The Finches put their names on the wait list for Deer Ridge in 2020 and were told that it may take up to five years before a residence becomes available. After a year and a half, Lew called to find out there were still over 100 people on the Deer Ridge wait list in front of them. But there was another option. The sales manager mentioned the Independence Plus style of living and that a two-bedroom unit in The Manor had just become available.

‚ÄúWe came and toured The Manor and said this will work perfectly,‚Äù said Lew. ‚ÄúWe moved in late summer 2021 and we love it. The people here can‚Äôt do enough for you. We‚Äôve not regretted it for one moment.‚Äù

Born on a farm in Fort Dodge, Iowa, Ron Johnson found his voice at a young age. He was a talented singer who wanted to make music his life‚Äôs work. He went to the University of Northern Iowa to study vocal music and worked as a music teacher in the Dysart-Geneseo school district for six years after graduation. ‚ÄúThere were a lot of good aspects to teaching but I finally realized it wasn‚Äôt God‚Äôs calling for my life,‚Äù Ron shared.

He went out in search of a new career and landed at Amana Appliances, now Whirlpool, where he became a production worker for the next thirty years. Ron continued to practice his craft in his free time, performing as a solo vocalist, a lead singer in a band and in a barbershop quartet. He met his future wife, Rita, at a dance at the Armar Ballroom in Marion. ‚ÄúI think we danced every dance together that night,‚Äù said Ron as Rita laughed, sitting in the chair next to him.

Ron and Rita love to travel. Their last big trip was to Italy in 2017. ‚ÄúBut when we got back, she started having memory problems,‚Äù said Ron. Living independently wouldn‚Äôt be an option for the Johnsons forever. But they were happy in their North Liberty home. ‚ÄúSo, I just kept kicking the can down the road,‚Äù Ron shared. ‚ÄúBut I was playing with fire. I had a lot of sleepless nights. We had to do something but where do you start?‚Äù

The Johnson’s Journey to Meth-Wick

By happenstance one day, Ron ran into a home health nurse, Kris, who had worked with the Johnsons over a decade earlier. As they began to catch up, Ron couldn‚Äôt help but share his concern for Rita. Kris stressed how important it was for Ron to make a plan and invited him over for coffee to talk options.

As a home health nurse, Kris had experience with many of the senior living options in the corridor and Meth-Wick was at the top of her list of recommendations. They would be able to move together into independent living but when Rita‚Äôs condition eventually requires more full-time help, Meth-Wick‚Äôs memory care center would be right next door. 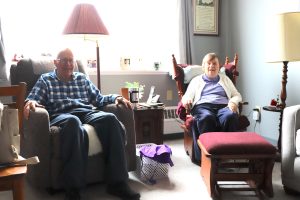 The Johnsons moved into a one-bedroom apartment in The Manor in August 2022 and jumped right into life at Meth-Wick. They stop by Manor Brew most mornings to chat with their neighbors. Ron works out in the fitness center every morning and has in-house care options for Rita when needed.

It was difficult for Ron to leave the home they had shared for 44 years. ‚ÄúBut coming here to Meth-Wick has been a dream,‚Äù Ron said. ‚ÄúLife was immediately better and fuller.‚Äù

He has also connected with a group of men on campus whose wives have dementia. ‚ÄúIt‚Äôs been a wonderful source of support,‚Äù Ron said. ‚ÄúI‚Äôm not alone in my worries.‚Äù

If you are considering Meth-Wick Community, begin planning today. Contact a member of our staff to start the conversation.