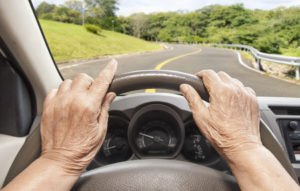 The world is growing grayer. By 2050, the global population of those 80 years and older is expected to triple; one-third of the population will be older than 65 years of age. That brings a common challenge for all countries: how do we support the large number of older drivers who experience physical and mental changes as part of the aging process?

Scientists in Germany believe they may have the answer. A study published on the Behavioral Neurology website¬Ýposes an intriguing idea‚Äîtraining the brains of seniors will increase their skill in driving safely. That got our attention, which is why we‚Äôre sharing this with you!

The researchers define driving as a complex task that requires visual, motor and cognitive skills‚Äîall factors that undergo change in older adults, including those in good health. But these changes will also vary from one individual to another. Because of this, the study‚Äôs authors stressed the importance of establishing a method for identifying older drivers, who have impairments that affect their driving ability, in order to implement training measures.

The authors also identified three areas of evaluation: functions needed in driving, driving ability in real traffic, and behavior in a driving simulator.

According to the German researchers, the key to countering the ‚Äúfunctional deficits‚Äù of older drivers lies in three areas: traffic environment, car environment and individual drivers.

They suggested complex locations, like intersections, should be structured as clearly as possible, with obvious signage and no distractions, such as advertisements. In-vehicle assistance, including GPS, aid older drivers by helping them focus on traffic by reducing their mental workload. They note that other driver assistive devices, currently in the works, may also prove useful.

According to an article, ‚ÄúThe Future of Driving,‚Äù on the CNN website,¬Ýautomakers and the federal government are developing technology that will allow vehicles to communicate with each other about traffic, weather and road conditions. ‚ÄúMore urgently, they can broadcast their speed and direction and warn each other about potential safety hazards, such as when a nearby vehicle is drifting into your lane,‚Äù Brandon Griggs wrote.

The director of Nissan‚Äôs research center, Marteen Sierhuis, is quoted in the same article. “If I can get information from the car next to me that they’re going to turn right, that would be great,” explained Sierhuis. He imagines a day when information about almost all vehicles is stored in the cloud and accessible by all.

The study‚Äôs authors recommend a specific sequence for measuring an older person‚Äôs driving ability when it is questioned by a family member, doctor or the individual themselves.

And if an individual does not pass the first two tests, they recommend a third measurement:

If the driving test raises a red flag as to the driver‚Äôs abilities, driving training should be used. Researchers point out that the greatest challenges to older drivers are situations that are unexpected (the car in front brakes suddenly) or complex (navigating a roundabout). They advocate using simulator training of complex driving situations or computer-based training of traffic-relative cognitive functions. These tools have proven successful in improving driving skills and reducing traffic accidents in older adult drivers.

Driving simulators can be programmed so that complex driving situations can be repeated until the driver is trained to react skillfully. While the cognitive tests of drivers trained on a simulator and those trained using a computer program showed improvement across the board, that was not the case with a real driving test. In that situation, those trained on the simulator excelled, probably because of that tool‚Äôs ability to create a real-life traffic experience.

Unfortunately, as the authors point out, simulators are not commonly used in driver training due to their expense. Most simulators are used by researcher to study driver behavior. But companies like Carnetsoft, based in The Netherlands, are working to make the simulator more affordable in an effort to help integrate them into driver training courses.

Meantime, due to the rare accessibility of simulators, the researchers recommend future studies to compare short-term and long-term outcomes of older adults who are trained by simulator and computer. In other words, the fact that simulators are superior in immediate driver improvement does not necessarily mean they will win out in the long haul.

All of this is good news because it shows there is significant effort and study to help older adults improve their driving skills, one of many factors important to remaining independent longer.