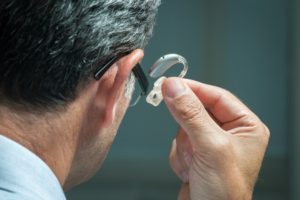 Hearing loss is getting a lot of attention from the federal government, researchers and manufacturers. As Americans are living longer, age-related health challenges like hearing loss can become barriers to independence and quality of life.

The cost of hearing

Hearing loss is associated with social isolation, depression, dementia, falls, and a decline in cognitive and physical functioning. Given this association, it is shocking to learn that only 20 percent of those with hearing loss use a hearing aid, according to an article on nextavenue.org.

The low treatment rate is understandable when you consider the fact that the average pair of hearing aids costs $4,700, has a life expectancy of three to five years, and isnŌĆÖt covered by Medicare.

In October 2015, the PresidentŌĆÖs Council of Advisors on Science and Technology acknowledged the importance of developing low cost, over-the-counter hearing devices. In June 2016, the National Academies of Sciences, Engineering and Medicine released its report, Hearing Health Care for Adults: Priorities for Improving Access and Affordability. The report is the work of a committee of experts tasked by the National Academies with defining the obstacles to accessing treatment for hearing loss and making recommendations for improvement.

The report states, ŌĆ£ŌĆ”the committee recommends key institutional, technological and regulatory changes that would enable consumers to find and fully use the appropriate, affordable, and high-quality services, technologies, and supports they need.ŌĆØ

The report also strongly argues that hearing loss can no longer be viewed as an individual concern. ŌĆ£There is a growing recognition that hearing loss is a significant public health concern that can be addressed by actions at multiple levels.ŌĆØ

Nearly 98 percent of the U.S. hearing aid market is controlled by six companies, resulting in high prices. To combat this lopsided market, last March Senators Chuck Grassley and Elizabeth Warren introduced a bill supporting the sale of over-the-counter hearing devices. Senator Grassley is quoted in the nextavenue.org article as saying the goal is to ŌĆ£increase competition, lower costs and expand access to devices for people with mild to moderate hearing loss.ŌĆØ

Affordable and accessible treatment options: That is good to hear!